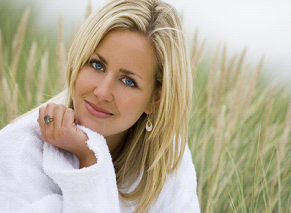 Progesterone’s amazing and far reaching benefits are nothing short of miraculous.
It improves mood, prevents spasms and inflammation, protects the nervous system, increases cognitive ability, improves memory, increases the IQ of babies, blocks the effects of the harmful estrogen (Estradiol) and possesses anti-cancer activity.
Unfortunately, a woman’s progesterone begins declining at age 35 due to genetics, diet and environmental factors.

Progesterone Deficiency in Women
A deficiency of Progesterone can lead to PMS, Endometriosis, Uterine Fibroids, Infertility, Miscarriages, Ectopic Pregnancy,  Pre-Term Births, Post Partum Depression, Osteoporosis and Cancer of the breasts, ovaries and uterus.
The annoying symptoms associated with a deficiency of Progesterone are more than a mere nuisance. They are signs of a hormonal imbalance in a continuum that progresses from PMS through a multitude of progressively more serious conditions and ultimately leads to a significantly increased risk of cancer.
Signs of Progesterone Deficiency
1.       PMS
2.       Endometriosis
3.       Uterine Fibroids
4.       Repeated Miscarriage
5.       Infertility
6.       Ectopic Pregnancy
7.       Preterm Labor & Delivery
8.       Post Partum Depression
9.       Osteoporosis
10.    Cancer

What Causes a Deficiency of Progesterone?
Hormone levels begin to decline in women at age 35 and at age 45 in men. In addition to this genetic decline, environmental estrogens are increasing the need for more Progesterone. Factory farms now feed Estradiol to dairy and beef cows in the U.S. to make them produce more milk and put on more weight so that they can get them to market sooner. Additionally, pesticides and plastics contain estrogenic chemicals that that further disrupt the endocrine balance. Unfortunately, the price we pay is a higher rate of Estrogen induced disease, including cancer, which is not yet being recognized or at least not admitted by the Dairy, Beef, agricultural and plastics Industry.
Premenstrual Syndrome (PMS)
PMS is a disorder effects as many as 75% of menstruating women. It is characterized by physical, mental and emotional symptoms that occur every month during the one to two weeks prior to menstruation. For most women, PMS symptoms cause mild to moderate disruptions to their daily routine, but many experience severe or disabling symptoms. Of the estimated 40 million women who suffer from PMS, more than 5 million have an extreme form of PMS that is known as Premenstrual Dysphoric Disorder or PMDD.

What are the symptoms of PMS?

Estradiol, on the other hand, does the opposite of progesterone. It causes a decrease in p53 and activates bcl2, the opposite acting protein that promotes cancer cell growth.
Breast Cancer and Progesterone Deficiency
One of the most significant studies of the relationship between low levels of natural progesterone and increased breast cancer risk was published in the American Journal of Epidemiology in 1981. The study followed 1,083 women with a history of difficulty becoming pregnant for periods ranging from 13 to 33 years.
The researchers found that infertile women who demonstrated a progesterone deficiency had a premenopausal breast cancer risk that was 540% greater than that of women whose infertility was due to non-hormonal causes. Furthermore, the women with a progesterone deficiency had a 1,000% greater chance of death from all types of cancer.
Serum progesterone levels at the time of breast cancer surgery influence survival rates, according to a 1996 study published in the British Journal of Cancer. Women who had progesterone levels of 400 ng/dL or greater at the time of breast cancer surgery had significantly better survival rates at 18 years than those with lower serum levels of progesterone at the time of surgery. In women with higher progesterone levels at the time of surgery, approximately 65% were alive 18 years later, whereas only 35% of the women with low progesterone levels survived 18 years.
Uterine Cancer and Progesterone
Conventional estrogen replacement therapy with synthetic estrogens increases the incidence
of endometrial (uterine lining) abnormalities, including cancer, according to a study published in the Journal of Endocrinolgy, Sept 2004.
Here’s the take home message: Breast cancer cells do not multiply when women have a sufficient supply of progesterone. Progesterone likewise also prevents cancer of the ovary and uterus as well as small cell lung cancer which is normally a very difficult cancer to treat.
Progesterone in Men
Men make about half as much progesterone as women. However, it is extremely important for men as well as it is for women. Progesterone gets converted into Testosterone. Most men know that the loss of Testosterone is associated with aging and causes decreased libido and erectile dysfunction. It is also associated with prostate cancer.
Progesterone preserves natural stores of Testosterone by preventing it from being converted into Di-Hydro-Testosterone (DHT), which blocks the prostate and causes Benign Prostate Enlargement and it’s bothersome symptoms including frequent urination, hesitancy, feeble urine stream and night-time urination.  Too much DHT also blocks the hair follicles and is the principal cause of male pattern baldness.
A deficiency of Testosterone, in men or women, is associated with a loss of muscle mass, joint pains, heart disease and the tendency to put on excess abdominal fat. Taking supplemental natural progesterone can boost your Testosterone level.
Progesterone and Prostate Cancer
Men typically make a very small amount of Estrogen: about 1/10th the amount of a woman. If however, the ratio of Estrogen to Progesterone gets out of balance, prostate cancer develops for the same reason breast or uterine cancer develops in a woman. Progesterone protects against cancer growth and Estradiol activates cancer cell growth.
What is the best form and dose of Progesterone?
The most effective form of progesterone is the oral, sub-lingual (under the tongue) form. The skin is designed to be a barrier, not to absorb hormones. It works well for a short while, but eventually progesterone applied to the skin gets shunted into fat cells and begins to build up. Eventually this excess progesterone can cause swelling, moodiness and irritability.
The mucous membranes of the mouth however, were designed for absorption. When progesterone is absorbed in the mouth, it is absorbed and transported through the blood stream directly to the ovaries, uterus and receptors on the pituitary gland, before it is broken down in the stomach or the liver and excreted from the body. I have found this method to be very effective without any excess buildup over time.
The sub-lingual form is safe to take for extended periods. The usual sub-lingual dose is 50 to 100 mg of natural progesterone daily depending on the individual. To determine the correct amount that is right for you, I recommend testing before and after one to three months of natural progesterone therapy. A blood test is preferred to saliva testing because sub-lingual dosing can remain in the saliva up to 48 hours after dosing and skew the results. It is recommended that you test your progesterone level every twelve months to make sure you remain at the optimal level.
Testing Your Progesterone Level
A woman should test her hormone periodically to make certain they are in balance and take a natural Progesterone supplement if her levels get too low, along with any of her other sex hormones that are out of balance. To learn more about hormone testing, click here.